How I Changed Everything in the Universe, Including Meditation 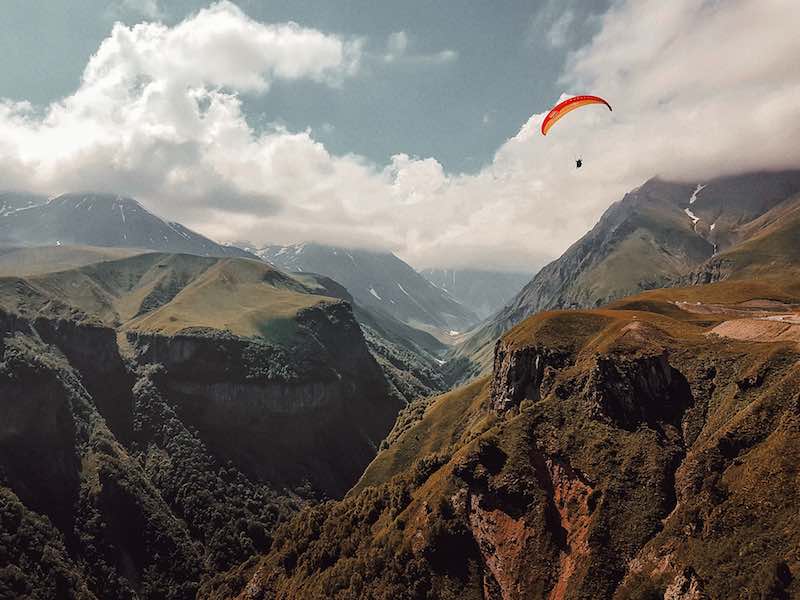 This is a true story about how I changed my meditation practice and everything else in the universe in one simple step. Well, one simple jump, anyway. In an effort to overcome fear of something entirely different, I jumped out of an airplane because I thought skydiving would be scarier. As it turns out, I was wrong: skydiving was way less scary than the thing I was avoiding. But the point is that the overarching result wasn’t what I expected. Instead of overcoming fear, I instead learned first-hand about how everything becomes different when seen through the lens of infinite possibility.

Read, listen, or read along as you listen. It’s all good.

After ten years working as a professional musician and composer in Los Angeles, I returned to school in my 30s to further study orchestral music composition and film scoring.

When it came time to begin a series of classes in conducting, scheduled to start just after my birthday, I was…well, terrified. For over a year of study, I’d been telling well-trained musicians what to play. Hubris enough, right? Now I was going to tell them how to play it.

I was scared outta my ever-lovin’ mind.

It felt like the most important thing in the world to me, and any misstep would mean the end of life as I knew it. It sounds funny (and it makes me laugh now), but it wasn’t funny at the time. I was almost frozen in fear.

So, shortly before the trimester began, I took myself on a little outing to overcome the fear. I had no clue that the experience would become a cornerstone in my meditation practice. In my life, actually. But the transformation wasn’t the result of conquering fear. It was the result of simply seeing fear for what it is. And seeing myself for what I am.

Let me backtrack a moment, to set the stage.

When I was a child, my parents were friends with another couple, Stephie and Tom. Stephie was tall and thin, Tom was short and stout. They had married each other’s ex-spouses and they had a fun and happy blended family. They both smiled and laughed at the drop of hat. They just seemed…super cool. And whenever I saw them, and Tom was wearing his orange jumpsuit, I knew that he’d been skydiving. Which, by extension of how cool they were, seemed like the coolest hobby ever.

And so I decided that, when I grew up, I would go skydiving.

My mother, however, didn’t share my sense of cool, or adventure. Of course, I can imagine it’s frightening when your child declares an intention to jump from a plane with a backpack and a pair of goggles as the only buffers between glory and disaster.

At first, I wasn’t daunted. But over the years, whenever I’d mention skydiving, her fears seeped into my hopes for myself. I never forgot about skydiving, but I came to see it as something to be feared. Something that I’d never do. Jump out of a plane? Only if it’s on fire, man. Eventually, I stopped remembering my excitement to try. I tucked it away without even realizing it.

You see where this story is going, right?

All the Fear That’s Fit to Fear

As the day grew closer to begin conducting, my panic grew. I tried to calm myself with What’s the Worst That Can Happen scenarios. They scared me more, since they all seemed not only probable but likely. I feared the music falling apart, of course, which was always more painful than I can ever describe. But it was more the possibility of humiliation that terrified me. I feared public failure at something I deeply wanted to be good at.

Definitely not fear of success, this was absolute fear of failure.

So on the morning of my 35th birthday, without mentioning it to friends, and without calling my mother, I drove from L.A. to Perris, CA., and in the calm and cloudless desert sky, I jumped out of an airplane.

As it turns out, skydiving wasn’t actually all that scary.

Mostly, it’s loud. I mean, super loud. And certainly, jumping out of an airplane, regardless of circumstance, is a study in commitment. Once you’re out the door of a moving airplane, splayed like a baby crawling on a waxed floor, you’re pretty much in the No Turning Back zone. But I wasn’t scared.

Nor had the slow flight up been frightening. Although, if I had more brains, I might’ve recognized the risk of being in that ramshackle old twin engine. Statistical odds of survival are far better outside of a plane like that than in it, even at 12,000 feet. You’re in this rickety old plane for a good 20 minutes as it spirals upwards. Climbing methodically to your doom. Until finally you’re pooped out into the blue yonder like a bespectacled sack of flour. I could almost hear Bugs Bunny taunt “Bon Voy Ahgee!” as I tipped out into the blue.

Largeness So Large It Felt Intimate

There I was, plummeting to earth, in classic free fall pose, and it wasn’t all that frightening. In fact, it wasn’t even as exhilarating as I’d always expected. I remember thinking, “Well, this is money I should’ve spent on bills.” (Skydiving is expensive, and I was a student.) The end of a strap from my parachute pack had come undone and was biting at my neck, forcing me to keep my chin away from my body and look outward. Objects on the ground were becoming larger so quickly that it seemed surreal. But I wasn’t afraid, only curious.

Despite the speed of free fall, and the loud rush of air as I jettisoned toward the ground, and the painful sting of the loose strap, and my amazement that this wasn’t as scary to me as standing up in front of a group of fellow musicians and counting to 4 over and over again, I just wasn’t feeling the love of a life-changing experience.

Not until I opened the chute, anyway.

After that moment, my life has never been the same.

When I pulled the cord to open the parachute, it felt as though I immediately froze in the sky. There was a sudden, deep quiet. A quiet that I hadn’t anticipated. And inside that awe-inspiring quiet, there was the view of a completely serene world. A largeness so large it felt intimate.

I had never before seen so much expanse. I don’t think you can see the expanse of the Earth’s sky any other way. It’s different from being in a plane, because you’re not in the expanse, you’re in the plane looking out at it. And it’s different from standing on a mountain top, with your feet on solid ground. The sky is unimaginably huge. Cosmically huge. And I was a tiny little dot in that hugeness. I’m the same tiny little dot on the ground, sure. But up there, in the wide expanse, I could feel my…dotness, and I was just hanging there, in the midst of All That Is.

As I dangled from the parachute, I felt my body buffeted by a wafting wind I couldn’t hear because there was nothing to define its movement. No trees. No cliffs. No buildings. It seemed I was too small for the wind to even notice.

And in that profoundly profound silence, I had a few intense seconds of experiencing the largeness of all creation. I wasn’t merely aware of it, I was aware that I was experiencing it. The whole thing. The sky. The solar system. The galaxy. Infinity. And me, a speck in that infinity, yes, but a speck that was of that infinity. Part of it. A definite and unique part of it.

Words have never helped me describe that epiphany, and I’m not sure they’re helping me now. Over the years, I’ve written a lot of instrumental music inspired by it, and informed by it. Being in that quiet sky was the most impactful physical experience of my life, and it changed my perspective, literally, forever. The rightness of being just a speck filled me with such peace of mind that I almost forgot to practice my landing maneuvers. You have to work the parachute levers to slow your decent when you get close to terra firma. If you don’t, landing will be awkward, even dangerous. I might have felt frozen in space, but in reality, I was still falling.

When I finally touched down — not the most dignified landing, I might add, because I’d not adequately slowed myself — I was still afraid of conducting. But I could now put the fear into perspective. Was the fear still the biggest thing in the Universe? Hardly. Was it the second-biggest? Not even close. Was it big enough for me to see? Of course, but only if I tried. And wouldn’t that be a rather boring thing to spend my time doing, when the vastness of All That Is was open before me? I would prefer to look out at an eternal horizon of possibility than at a pinpoint of uncertainty. I was a dot, a speck, and the fear was even smaller than me.

Here is an abbreviated list of the consequences of my jump:

We are infinite possibility in a boundless sky of infinite possibility, all of us. In this human life, we are creatures of an ever-evolving Now. Fear and hope are dust motes of the past and future, clouding our perception of what is real. They are nothing in the face of our infinite power and potential. We, these tiny specks, are giants in comparison.

And we are, each of us, just one jump away from remembering.

If You Liked This Article, Find Others With Similar Topics